What We Do in the Shadows, 2015 / Taika Waititi, Jemaine Clement 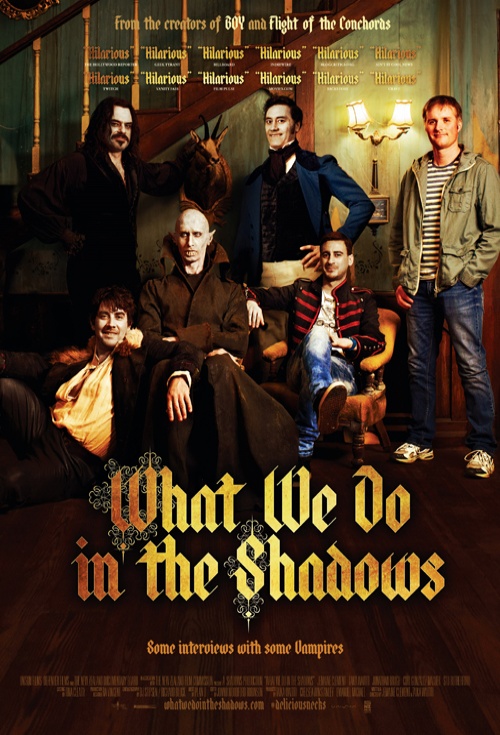 I’m not at all a fan of vampire flicks (Let the Right One In and Interview with the Vampire being the only exceptions I can remember) – and yet I was eagerly anticipating What We Do in the Shadows. The main reason, of course, was the big creative presence of Jemaine Clement, one half of Flight of the Conchords, who co-writes and co-directs here. To that end, the absence of Bret McKenzie (the other half of the comedy duo) was a disappointment – I could really imagine McKenzie as a shy, clueless vampire who bites into necks with an air of resigned embarrassment. This was, however, the only disappointment. What We Do in the Shadows is taut and punchy, extremely well-paced, funny as hell, technically impeccable, and in contrast to Twilight‘s vain, unsuccessful attempts – humane and touching. The movie starts with credits on a black screen, and is immediately hilarious. We are told we are to watch a documentary supported by the New Zealand Documentary Board (as far as I can tell, a non-existent organization), where the filmmakers are wearing crucifixes and have been given assurances by their film’s subjects that they won’t be attacked. This “vampire documentary” genre statement perfectly sets the tone for the next 86 minutes. With an introduction by Viago (the most delicate and well-mannered, and also the gayest of the characters – though he’s not gay), we get to meet a merry band of vampires who share a Gothic-looking apartment in, well, Wellington, New Zealand. Followed by two cameras, to which he refers with some trepidation, Viago attempts to organize a flatmates meeting to discuss house chores and the sharing of responsibilities such as the washing of dishes splashed with dried-up blood. Vladislav (Clement) and Deacon (Jonathon Brugh) are too unruly to care that much, while Petyr (Ben Fransham) is probably too old – he’s in his 8000’s and rarely leaves his stand-up coffin.

From here on the film proceeds, at least on the surface, as a loose succession of improvised scenes that sketch the daily routine of the vampire bunch. This is a bit misleading, though. All hints of improvisation disappear once we see the first scene with special effects – these awkward fellas can fly though the air or walk on the ceiling with the best of them. At the same time, the skits fall one after the other, not allowing you to finish your laugh (in comedy’s best traditions) before hitting you with a fresh one – and they seamlessly weave into a story. It’s not much of a drama considering the exquisite silliness of it all, but all three main characters get the time to show us their inner demons, and then face them head-on before the end of the film, with hilarious consequences. In various ways, and true to the genre’s biggest cliche (“vampires are agents of passion”), Viago, Deacon and Vladislav deal with love, unrequited, misunderstood or broken. With their awkwardness and simplicity, they become not simply images of lovelorn vampires, but actual human beings. And the strength of What We Do in the Shadows, I think, lies in there.

That said, let go back to the basics: I mentioned the genre’s cliches, and they are all carefully cataloged, then mercilessly, but intelligently mocked. Our guys would really love to go to a normal night club – but being vampires, they have to get invited in – by bouncers who are too thick to respond. They have to remain extremely discreet and protect their lair from humans – but then they accept a quiet guy called Stu into their apartment, no questions asked – simply because “everybody likes Stu”. They go outside, proudly flaunting their over-the-top, aristocratic clothes – and are promptly labeled as “homos” by a passer-by. All in all, the movie unpretentiously lists the random everyday problems modern vampires encounter. This makes the subjects of the mockumentary both irresistibly funny and warmly human. Just wait and see the mysterious creature called The Beast, the arch-nemesis of Vladislav, and you’ll know what I mean.