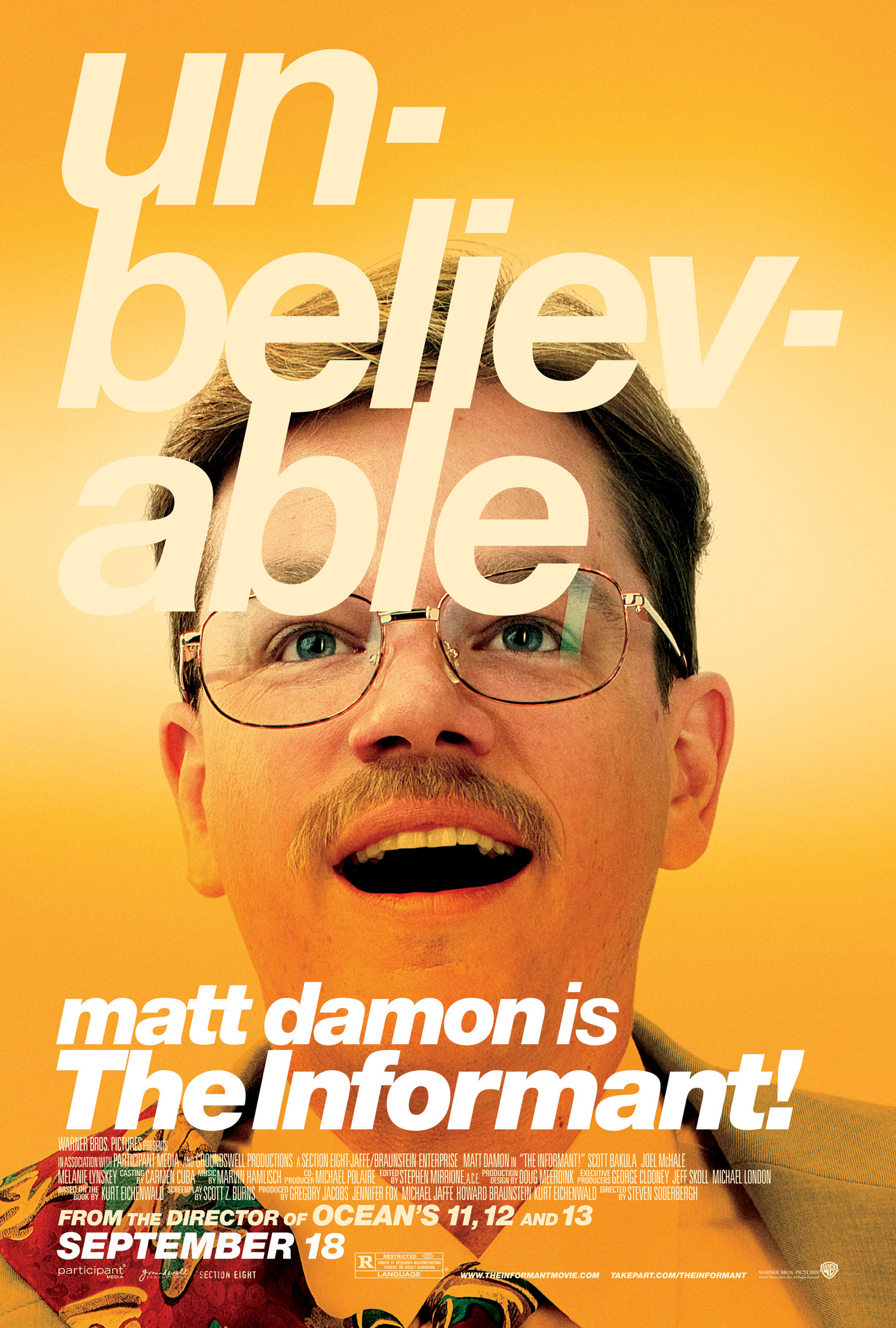 For some time, The Informant! appeared to be a movie from the same family as Erin Brockovich (Soderbergh’s again) – an exploration on corporate wrongdoing and the role of a conscious individual in exposing it. But at one point, the conscious individual in question – Matt Damon as Mark Whitacre, a real-life high-ranking executive on the giant agricultural business corporation ADM – starts acting kinda weird… And the movie goes in a completely different direction. Corporate greed is just a part of it, but it’s more a movie about Whitacre himself – a funny, bipolar, even maniacal man with an honest devotion to the truth but an even more powerful obsession with lying. Whitacre is so fascinating that I was dragged in simply following his crazy path, juggling with secret listening devices, hidden cameras, his fellow executives, Japanese and French partners whose price-fixing practices he is trying to expose, and several layers of FBI professionals who build their case on his good will and watch it unravel as his own lies come tumbling out in the open. So the morals of The Informant! are not as straightforward to decipher, and by the end it’s much more difficult to say what this movie is about. Maybe it’s a fable about the delusions suffered by (any) big-company executive in our greedy world, delusions that undermine the solid basis of sound economy. Or maybe it’s simply the story of the split personality of an extremely interesting man who gets entangled in some very complex situations with some very important people and with some very serious consequences. Anyway it’s quite an entertaining movie. It was shot on Red Camera (high-end digital), but the post-production is so good and precise that it’s almost impossible to tell. And the music – a great mix of “spy themes” that betray Whitacre’s view of himself as an “Agent 0014” (cause he’s twice as smart os 007). It was also interesting to learn about Soderbergh’s and Scott Burns’s (the screenplay writer) approach to the off-screen narration that is read in the voice of Matt Damon. This internal monologue is a series of thought-vignettes that “do nothing to propel the story forward” – but without which the film would not be what it is, would not be sufficient. They were completely made-up by Burns, but as it turns out, the real Mark Whitacre (who eventually served almost 9 years in jail and is now the owner of a high-tech company in the US) thinks the filmmakers “nailed them”. So that says something about writing for film, I guess. Here’s my favourite of these vignettes:

“When polar bears hunt, they crouch down by a hole in the ice and wait for a seal to pop up. They keep one paw over their nose so that they blend in, because they’ve got those black noses. They’d blend in perfectly if not for the nose. So the question is, how do they know their noses are black? From looking at other polar bears? Do they see their reflections in the water and think, “I’d be invisible if not for that.” That seems like a lot of thinking for a bear.”