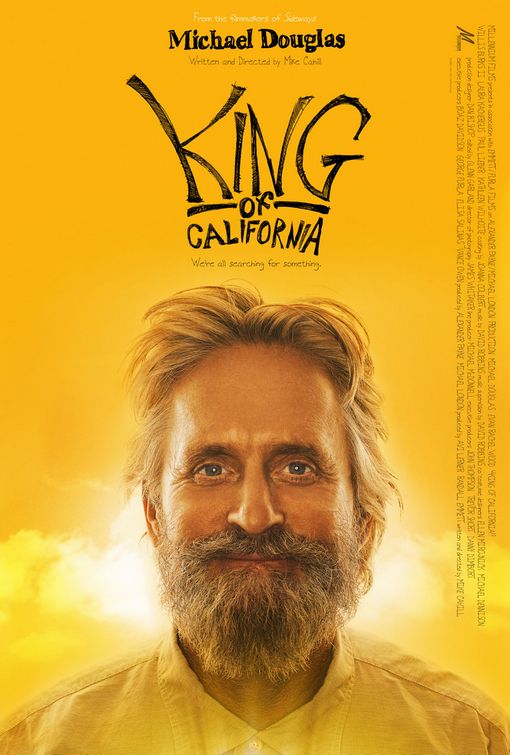 Can’t say my impression of this movie is based on pure viewing as I saw it in three overnight installments, falling asleep not because it was boring, but simply out of exhaustion. I’ve always liked Michael Douglas in a way, because of the potential to be good I’ve felt he has, rather than for being good actually. Well, I think he is good in this one, leaving behind his characteristic onscreen sluggishness. He portrays a bipolar father, ostensibly in search of a Californian treasure, but really – of his daughter’s respect and affection. King of California was one of those indie American movies that I always sit down to watch eagerly (don’t know why, but I’m somehow more ready to believe them, to like them). Haven’t found such a movie in quite a while, ever since  C.R.A.Z.Y. (which was Canadian I think) and Mean Creek a couple of years ago. I’ve grown a bit more critical and harder to please maybe…So this one wasn’t exactly a revelation, but still had me watching dreamily through the full credits, a good testament to a movie that leaves some aftertaste, stirs a thought or an emotion. Here are some moments that impressed: the scene where Charlie (Michael Douglas) is approached by a policewoman for trespassing, only to successfully hit on her…his face bathed in light, eyes behind goggles half-filled with water, looking up and ready…Pepper, the mellow, brave accomplice to the break-and-enter operation that frames the culmination of the movie…the way the treasure was portrayed…and the often surprising, refreshing, even beautifully uncomprehensible use of the soundtrack to push expectation and emotion into unconventional planes (funny when supposed to be dramatic, Mexican trumpets-epic instead of prosaic). The flashbacks were dross, and I did not get the Chinese invasion at the end, though I’m sure it has something to do with “a rebirth out of the water” or whatever…Evan Rachel Wood is good but unfortunately not sexy enough (to me!) which is a must if you want to give the film that extra special edge!