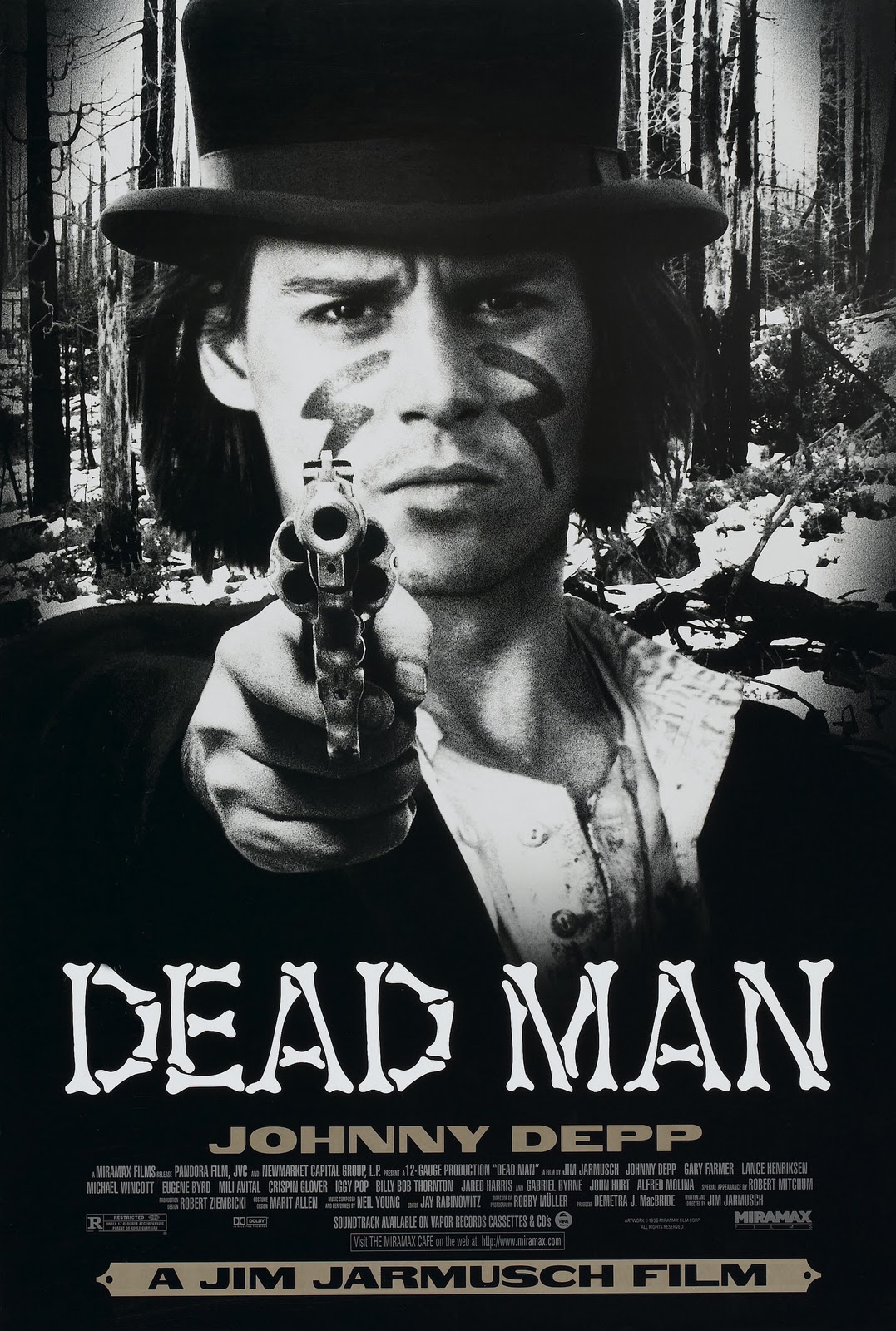 In probably Jim Jarmusch’s darkest, blackest – but still somehow light and gentle work, Dead Man, Johnny Depp becomes William Blake. Blake is a young, innocent-faced Cleveland accountant who travels west in pursuit of a new job, but ends up on a spiritual journey with a final destination: death. The anti-utopian “acid western” (the sub-genre term was actually coined for this particular film) tells a simple if a bit psychedelic story, classically painted in black and white. It’s my favourite Jarmusch film, a construction that features the trademark Jarmusch low-key naivety of visual expression – but that works on so many levels that the three times I’ve viewed it are far from enough.

The film starts with a sequence of shots that depict William Blake already on his journey, aboard the Iron Horse that cuts its way through and into the heart of the American West. With simple strokes, relying heavily on fade in/outs as Blake dozes in and out of sleep, Jarmusch quickly lets us know that the new life Blake moves towards is not one of hope and unlimited possibilities. Instead, the landscape becomes more savage and decrepit; Blake’s fellow train travelers – rougher, dirtier, and more menacing. Through a surreal conversation between Blake and the train’s fireman (a soot-covered Crispin Glover), we quickly become aware of the main character’s primary goal in the story – he is headed to the town of Machine to become an accountant in the metal-works factory there. Yet we already know that this will not be what Blake will be doing for the rest of Dead Man.

The film borrows a classic western movie’s storyline (involving a pretty prostitute, a jealous, violent lover, an imposing, cruel town-master, and a bunch of crooked headhunters) to change the direction of Blake’s journey and set him on a new course, peppered with new, dangerous obstacles. But the mold is broken by the fact that Depp’s character in effect “dies” within the first act of the film. This is not really a spoiler, it’s more a prerequisite for Dead Man‘s theme and success. William Blake is transported upon a new plane, a more spiritual on, where the mystery of whether he will survive or not is the least mysterious one. He is chased and attacked, but we are no longer worried for him in an everyday sense – his quest is for something more. What this something is – that’s left for everyone to decide for themselves.

On this new plane, somehow stuck between life and death, but unquestionably headed towards the latter, William Blake is joined and helped by an amusing companion – a Native American going by the name of Nobody (perfectly brought to life by Gary Farmer). To Nobody, Blake is just another “stupid white man”, whose only value is based on the amount of tobacco he carries (none – as Blake does not smoke). The saving grace, weirdly, is the fact William Blake shares a name with the famous English poet, and Nobody – maybe jokingly – accepts that the poet’s spirit has come to him for help in the body of Depp’s character. Nobody is well-versed in the works of the poet – and this is not merely a quirky detail imported by Jarmusch to give the film colour. It’s a conscious choice to show a Native American (and a goofy reject at that) as a poetry-fan, while the supposedly closer situated to the English culture Americans care less for art than they do for eating human flesh (as one of Blake’s pursuers does). Logically, Nobody’s affinity for William Blake the poet is explained through his back story of kidnap and European travels. Nobody is far from perfect, but he is much more in touch with life’s spiritual, meta dimensions than any of the “stupid white men”, including even the main protagonist, William Blake. Nobody is overweight, obsessed with tobacco, and makes sex like and animal, so he is far from the Native American stereotype of cheap, superficial spirituality. But he knows the importance of maintaining a connection to the higher powers. So his soul is probably salvageable. His figure, aligned to Blake’s journey in the second and third act, gives us a clue of the main character’s conflict: will William Blake be finally able to leave the physical world in the right way? He is a dead man, that’s for sure, but what will happen to his soul?

While classic westerns traditionally deal with the notion of good vs. evil, Dead Man deliberately and openly chooses a different approach. Once shot and put upon his path towards death, William Blake turns into a killing machine, obliterating even mildly aggressive characters. Nobody does have a part to play n this, telling Blake: “That weapon will replace your tongue. You will learn to speak through it. And your poetry will now be written with blood.” The context is traditional – the Wild West, young America. All Jarmusch does is be very simple and open – life has no value here, so why tangle with useless concepts of good and bad?

The acting posture which Depp later in his career perfected to a degree that became even a bit irritating – that of bored slash innocent slash naive bravado mixed with a healthy dose of humour – serves his character and the film perfectly. Strangely, it sets him apart from all other characters in Dead Man, who are in different ways more down-to-earth than he is. So Depp’s characters “floats”, separated from everybody else even when talking, fighting, or being in any kind of physical contact with them. This is one of the bigger achievements of Jarmusch as a director, and my suspicion is that it was much more the result of casting a man with the proper exuberance, than of molding the actor into some imagined human figure. That is to say, Depp is William Blake probably more than he becomes William Blake.

Dead Man appears cryptic, or spontaneously constructed at best – and as a great piece of art, writing about it in the attempt to explain or deconstruct it does not do justice to the experience of simply sitting down and watching it. So it’s best left to the individual to decide what this film is about, what its main theme is. To me, it seems Jim Jarmusch tries to go back to the origins of the American dream, and show in his very particular style of writing and film-making how this very American dream was crooked at its birth. It was built upon the “way of the gun”, upon cocky disregard of life’s basic laws, even an epic, deliberate, maniacally joyous struggle against these laws. The American dream was based, from its inception, on destruction and death; the search for the West frontier was not a limitless flight towards freedom, but an irreversible plunge into hell. And in this collective fall, to which we all still contribute on a daily basis (because, lets face it, we all in one way or another live the American dream), the individual is by definition A DEAD MAN. His only meaningful struggle would be to try and float above all else, above the filth, and leave (not live – this is virtually impossible) this life in a dignified, synched with nature way. Our brightest hope is that Death is a journey towards a mysterious salvation of the spirit.

Dead Man features cameos from giants like John Hurt, Robert Mitchum, Gabriel Byrne, Lance Henriksen and Iggy Pop, and the unforgettable soundtrack by Neil Young (for the composing of which he famously locked himself alone in a studio with Jarmusch’s fresh edit and improvised the hell out of his guitar). If you haven’t seen the film yet, don’t delay.