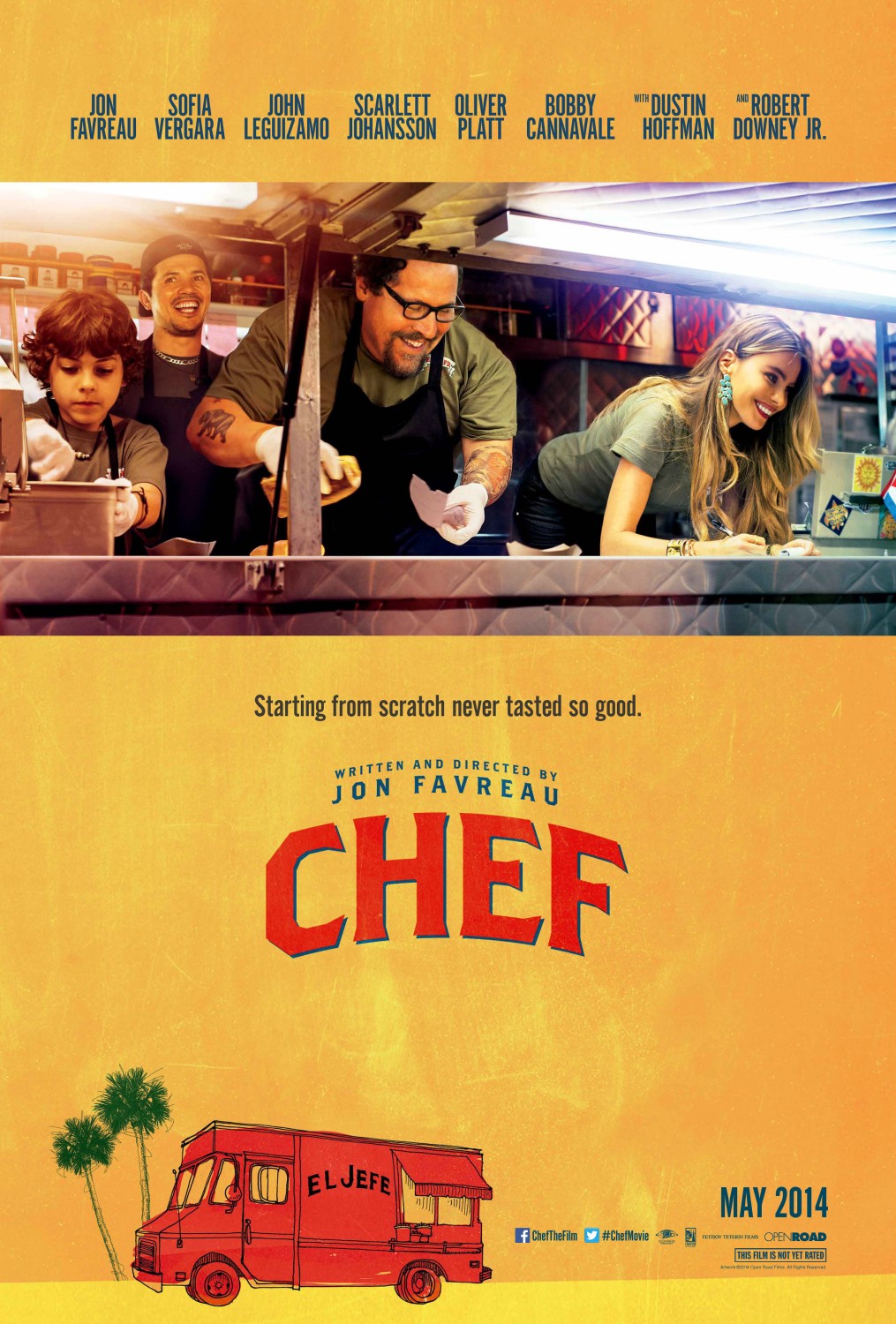 Chef can be an easy target for movie criticism, should one decide to savagely carve through its tender flesh with a sharp kitchen knife. The film embraces Hollywood cliches with a shrug of its shoulders; decides to ride it out with pretty much no central conflict at all – or any meaningful conflict, for that matter; bases its premise on the assumption that a star chef living a life on the top of the food chain in L.A. has never heard of Twitter; and offers an ending that borders on insulting. We can, however, get those major sins out of the way early on – that’s why I’m starting with a quick list of them – and then sit back and enjoy one of the best feel-good rides of the last several years. I’ve had great difficulty in my attempts to find a true comedy, a genuine lighthearted flick that can uncompromisingly switch off the burdens of the mind. It’s always much easier to find a plethora of Marvel bombastic soundscapes or wrist-cutting European art depressions. But a good old feel-good movie is hard to come by, especially one that doesn’t announce itself as a rom-com or a stoner written extravaganza from the Apatow wave. Well, Chef is an exception.

In its essence, the movie is a tale about a divorced star chef going through a midlife-crisis, and coming on top of it in great style. However, whatever drama the script mildly suggests, the film dispenses with in its first half. There is a stand-off between Favreau’s character Carl Casper and the owner of the restaurant he works at (a regularly casual but still great Dustin Hoffman)… Carl’s inability to spend more quality time with his son from a broken marriage, who want to “just hang out with Dad”… And the high stakes of a visit from a famous food blogger (Oliver Platt, looking pointedly disinterested in his acting) and the ensuing Twitter storm Carl initiates through a mixture of ignorance and stubborn stupidity (I did mention the midlife crisis, didn’t I?) Once Carl has lost it all, Chef turns into one very long final act of celebration – celebration of soul food, of camaraderie, of saying “to hell with it all” and going all the way back down to your roots. This final, “roots” part might be the movie’s boldest statement – we all dream of doing it, but we are all scared of throwing away twenty years of hard work to do it, but look – it will work out great. You only need to close your eyes, let go of everything you thought was dear to you but was keeping you chained instead, and jump down to the bottom. From there on a road trip awaits (the road trip is part of everybody’s dream of starting with a clean slate, I’m sure, whether it’s to New Zealand, Route 66 or the village you grew up in), broken loves are magically (and in movie terms – without any exposition whatsoever) healed, and a life’s vocation is gloriously fulfilled. Did I mention Chef is definitely a feel-good movie?

Favreau (for whom this is rumored to be a passion project) used his clout as director of the first two Iron Man films to pepper Chef with cameos that should give something to everyone – from Scarlett Johansson (restaurant hostess Molly), through Sofia Vergara (Carl’s ex-wife, though one can never tell why they were divorced), to a type-cast Robert Downey Jr. Above all, I was really happy to see the talented John Leguizamo, who for me doesn’t seem to get enough roles these days, as Carl’s loyal sidekick Martin. The major supporting role is however given to the food. Even without seeing the “rushes outtake” final credits scene, where Favreau gets taught how to make the perfect grilled cheese sandwich, you will notice how much care was given to the way food is depicted in the film. It’s not simply food-styling, nor is it all due to the exquisite camera-work. Food is made to look alive, just like a person that you get to care for. One thing is certain – make sure you sit down to watch Chef with a plate with something really delicious on your lap. Even if you are not hungry, you will find yourself reaching for it before long, while unable to shake that slight, dumb smile from your face. Time to forget today’s serving of bad news, at least for 114 minutes.