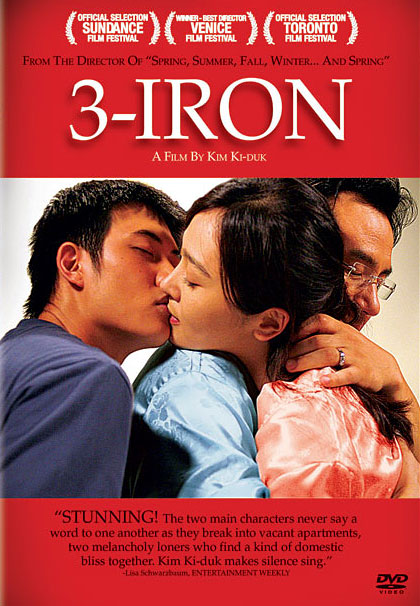 Let’s start with the bad: apart from its two main protagonists (young roamer Tae-suk and depressed and violated house wife Sun-hwa), 3-Iron boasts some impressively bad acting. But then: it’s also a movie well worth your time. Ki-duk Kim’s success – and his perceived lack of popularity in his home country – is more often than not rooted in his fable-like, poetic approach to writing. And 3-Iron makes no exception – it’s a visual poem that suffers on the rare occasions one of its characters opens their mouth. Maybe it’s because it centers on the themes of the beauty of invisibility, transcending of all kinds of prison walls, and breaking the boundaries of perception. Put this way, it all sounds a bit too general, and that’s why, like any Kim film, this one is better left not commented on. It’s better to simply see and experience it.

Still, on my little personal quest to cut through and uncover the structural (and with much greater difficulty, the emotional) foundation of almost everything I see – I am foolishly tickled to dive into terminology and formula application. 3-Iron has a surprisingly clear-cut plot. The hero has no apparent purpose in life, until he meets the girl, who is in trouble. He rescues her and makes her fall in love with him, but her troubles catch up with them. They fight with their antagonists and struggle, but are separated. So as she patiently waits for him, he hatches a plan that will help him be with her. In the end, as he vanquishes his antagonists, one by one, they are reunited. Sounds very simple, and it actually is – but in Kim’s terms, which is to say every next scene is both modest, true, surprising and yet feels like the natural thing to happen. Kim makes everyday life scenes look quite weird, often purely magical, and at the same time… well, everyday. You can’t help feeling that the writer and director is big on patience, and all his major characters (that I am familiar with) are blessed with plenty of this meditative patience. Some would say they behave in ways that show they are bigger than life itself, but there is rarely a hint of grandiosity. It’s replaced by humility.

Initially, Tae-suk does not seem to have a clear goal, apart from the everyday task of finding an empty apartment to spend the night. He never says a word (in fact, we never learn if he in fact is even able to speak), and he freely takes baths, watches TV, rearranges objects or wears the apartments’ owners clothes. But somehow, his is not a creepy presence. He explores the invaded homes in a way that makes us wonder what this would feel like if we were doing it. There is a certain freedom about the whole process, especially after it becomes clear how, to its owners, every place is both a loved, cozy nest, and a prison. As Tae-suk comes across the abused Sun-hwa in her own home, his goal is driven into focus – he needs to takes her out of her prison. It’s a classic – the independent and strong male feels the need to care for the wounded and fragile (and of course pretty) female. That’s a good plot foundation for Kim, as it allows him to step on it and then let his imagination run more freely when it comes to character motivations and poetic expressions of theme.

A very simple, but original plot thread shows how Sun-hwa’s attempts to tame Tae-suk’s inner rage lead him to commit a mistake and cause a serious bodily harm to an innocent minor character. It’s a little twist that forces a change in Tae-suk (he starts to feel shame and question himself), and prepares us for the events in the second half of the film, when he will be wrongfully imprisoned. This little episode is what will make Tae-suk accept his later imprisonment without trying to defend his obvious innocence (which otherwise would have been an extremely illogical action, to the point that it could have harmed the audience’s suspension of disbelief).

Coming back to the theme of “home as a prison” – Kim inserts a place that provides the exception to the rule. It’s the home of a young, kind and relaxed couple, which, in contrast to all other apartments, has a more open, nature-friendly feel. Kim, unapologetic, selects a location for it that openly resembles a Buddhist temple, thus continuing one of his favorite, oeuvre-defining themes, about the way in which a Buddhist way of life provides clarity, purpose, and meaning. In this home, three scenes take place: the fist kiss between Sun-hwa and Tae-suk; a moment when Sun-hwa’s returns there alone, while Tae-suk is still in prison – and, without saying a word to the owners, simply lies down on the sofa and takes a nap (to me, probably the strongest scene in the movie); and the return of Tae-suk there, after his escape from prison, as one of the steps on his quest to re-visit all previously shown apartments – but this time as an invisible, all-seeing ghost. The last scene, though it does serve a plot purpose, is still something of a mystery to me, and I will keep watching it to look for a deeper meaning (though there simply might not be one seeded there).

The third act is surprising mostly because of the method Tae-suk chooses to use for the final fight for his girl – he learns to become invisible. It is not a course of action a Hollywood-brainwashed mind would expect – and yet, it’s the one and only weapon he can call upon. This is what he has done all his life – staying silent, out of people’s view, sneaking through life. Now, however, he has a passionate motivation, a painfully clear goal. And this helps him perfect himself, change by moving to a higher level. A meditative scene inserted by Kim suggests the upgrade is, most of all, spiritual. And you wouldn’t expect anything less from this director.

If you’ve seen the film’s official poster, you’ll unfortunately get a major hint about what happens in the end. Still, it’s beautiful.